Skip to content
Sometimes we need a recipe that is not only delicious but also acts as the perfect multi tasker. Are you on the search for that magical recipe? Well, look no further, here’s a lip smacking vegetable bake that echoes the saying “simplicity at its best!” It is as versatile as it is simple; from bakes to pasta sauce to open sandies and fried into balls, this mix will definitely become an integral part of your continental repertoire. 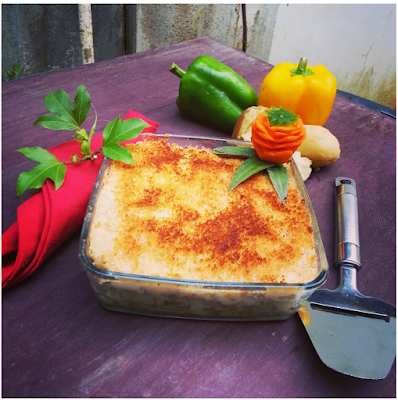 Ingredients:
Veges:
Spinach- a large handful
Corn- a handful
Onion- 1 large
Mushrooms (optional)- 500 gms
(Tip: mushrooms add a real meatiness to the dish. I would definitely suggest adding it)
(Tip: non vegetarians can add a whole cornucopia of ingredients; sausage, shredded chicken, fish, prawn…sky’s the limit)
White sauce:
Cornflour (Tip: this is a maida free recipe, so cornflour was subbed instead)- 4 tsp
Pepper- 1/4 tsp
Milk- 1 cup (Tip: keep a little milk separately in case the mix becomes too thick)
Butter- 2 tsp
Cheese (grated)- a small handful to sprinkle atop along with the breadcrumbs
Breadcrumbs (Tip: adds a delightful crunch and texture to the dish)- enough to cover the top layer of the dish
Salt
Water- 1 tsp
Method:
– In a pan, add a little water, salt, spinach and onion and steam till the veges soften but the spinach retains its green colour
(Tip: after steaming, keep the spinach and onion mix open. Do not cover. This will help retain the green colour).
– In another pan, melt butter, add pepper and stir (this removes the rawness of the pepper), add cornflour and milk and stir well to remove lumps.
– Once the desired consistency is reached, take the white sauce off the stove.
(Tip: add more cornflour or milk according to how thin or thick your sauce is)
– Add ready cooked corn into the sauce, followed by the spinach and

– Mix till even and spread onto a baking dish.
– Evenly spread the cheese followed by a thin helping of breadcrumbs to finish the top layer
– Bake in an OTG until the top layer becomes golden brown and crunchy.
– Team this up with some lightly buttered garlic toast and gobble away! Enjoy!

1 thought on “Spinach and Corn bake”