Skip to content
Last Saturday evening saw a rather enthusiastic (despite the heavy downpour) gathering of women at the Rotary Bal Bhavan in Panampilly Nagar. Ladies from different walks of life, ages and professions; the super glue that held this eclectic collection of women together? A sheer passion for food.

“When women work together amazing things happen” read the tagline on a pretty in pink banner strung up on stage. “WOW” was all I could say. Other than being appreciative in every sense, WOW also stood for the organizers of the event. WOW: “Women Of the World” was the brainchild of two equally wow women: Nidhi S Bhalla and Shweta S Vasudevan. There is so much latent talent amongst women folk. Many women are unable to showcase these talents because they lack thorough knowledge of the who, why, what, when, where and how. Nidhi and Shweta see every woman as an important piece of a large jigsaw puzzle. They believe that it is only when they come together (or work together) that the bigger, better picture is created. Thusly, with the ultimate goal of bringing women together to help one another; a co joining of hearts and minds if you will, Co-founders and partners Nidhi and Shweta lauched “Women of the world” on 2nd April 2016. Their purpose being encouraging entrepreneurship, image enhancement, networking and information exchange, thereby empowering women to throw some limelight on the best of their talents. WOW constantly looks at new and engaging events through which women can help and motivate each other, this in turn leads to immense support and learning.

The agenda of the evening was simple enough. Two solid hours dedicated to“Women Food entrepreneurs” (of course lots of fun and delicious food entailed in the mix). Cochin has proven a steadfast stepping stone to several home cooks, women who started from scratch and then with some (read: a lot) persuasion, persistence and perseverance took their culinary skills to the next level. Many now have thriving businesses paired with a huge dollop of fame and an unshakeably loyal customer base. This event was to provide a springboard of vital information for various home cooks eager to let the world know what their kitchen has on offer. WOW had arranged for eminent speakers to give inputs regarding the food business scenario with a round of Q and A to address all queries.

We had the utter pleasure of being addressed by two of Cochin’s culinary business gems: Harsha Thachery of Masala Box and Anna Austin of Cake Canvas.
After a brief introduction by Shweta, Harsha took the stage and delved into the “Once upon a time” behind MASALA BOX. Considering the kind of success Masala Box has enjoyed, you’d expect its CEO to be sitting on an unapproachable high horse herself, but no, Harsha, with her warm smile and open face was simply a delight to listen to. A personal requirement for healthy eating out options during her pregnancy, led to the creation of something fantastic. Masala Box ties together some of the best home cooks in Cochin (and now Bangalore) to rustle up delicious dishes, made fresh every single day. With the options of lunch and dinner available, each dish is cooked/ baked as per orders received. And then within a specific radius, the orders are delivered within a given time frame. The display of the day’s dishes, selection and payment are all done through their online portal.

Success did not come overnight for Masala Box. Months and months of homework lay ahead, a fragmented market to wade through, number crunching, projections to be made and of course getting the talent source together. One of the major hurdles faced by Harsha was getting across a brand new concept of Masala Box to home cooks who were not at all familiar with the working of the web. Once that was sorted out, the trickle of interested home cooks, through word of mouth turned out into a satisfyingly large torrent. To her amazement, being a woman entrepreneur, she was not greeted with sexist notions, but there actually were nice, helpful people out there ready to nurture and encourage her every step of the way. She was awarded the “Start-Up Entrepreneur of the year” by TiE in 2015. Apart from the single hub in Cochin, Masala Box now operates in 2 hubs in Bangalore. Positivity ringed Harsha’s face as she expressed her goal to take Masala Box pan India in 2 to 3 years.

I must say that I almost shamelessly squealed when I met Anna Austin. I was always a big fan of her work and having a one on one with a cake master of her level and recognition, was like meeting a favourite movie star! From winning the “Pretty Witty cake award” in 2014 to being chosen as a finalist in the Modelling excellence award at the Cake Masters Magazine Awards 2015, this baker has definitely gone places. She took to the mike with much apprehension and apologies as it was her first time addressing a crowd! Anna went on to show us a kaleidoscope of amazing works of edible art she had created, through a presentation. The audience sat in absolute awe! The point that hit home for me was Anna mentioning the immense support and encouragement she received from her family.

Anna was always an artist. She did love baking but she always felt a need to express her artistic qualities through her food. Much like WOW’s tagline, Anna’s first cake order was coaxed and cajoled for Harsha’s daughter’s birthday. From there on, there has been no looking back! Thusly her love for art and a stellar chocolate cake recipe (incidentally, Anna bakes cakes in only one delicious chocolate flavour which is said to waft the smell of Belgian chocolates- I’m as happy as a bumblebee and definitely not complaining!) led to the beginnings of CAKE CANVAS; a name suggested by her husband who is also her biggest fan! Anna like to always keep herself abreast of the happenings in the world of cake art. Ever since she attuned her talents to sculpting caricature cakes from her designer studio, she has constantly kept herself informed through online and contact classes. She reminded us that despite all her laurels, she was a very real person who started from scratch and it was only the love and support provided by her family and friends that helped her attain her success.

Post the Q and A session, we were all ready to stretch our legs when Jyothi Vijayakumar, brimming with confidence was introduced to us. A dancer by profession, this gorgeous diva is the owner of MAYA STUDIO OF GODDESS ARTS. Jyothi is passionate about Belly Dancing and she thoroughly believes that belly dancing made her confident about her body and soul and healed her inside and out after the birth of her two daughters. There was no refuting this fact as she performed for us with much grace and poise. But oh it did not stop there, she invited a few of us to try out some of her moves. Of course I jumped at the chance and though we looked like wooden puppets trying to shimmy, we ended up having a lot of fun!

Bursting with excitement we returned to our seats just in time for a delightful food quiz! Around the world in 15 questions it was with some peeking into their neighbour’s papers, some comically protesting the correctness of their answers…it was a fun time for sure! To keep us hydrated an amazing quencher was served. A bright, happy yellow, this drink had me bowled over from the first sip. By the way, the ingredients of this drink turned out to be a quiz question! 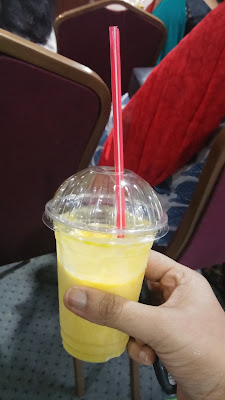 Guesses ranged from mangoes and kesar to orange and papaya. Just when I was controlling myself from bursting out with “blitzed laddoo”, the answer was announced. PUMPKIN! I could scarcely believe my taste buds. I would without a doubt have to say that this blended concoction was the most delicious of all blended concoctions and I would have it coroneted if I had the chance! We had BLEND!T to thank for this Pumpkin delight; which happens to be yet another successful venture from Nidhi (and the most brilliant business woman award goes to…!)

Blend!t brings health and taste together in one delicious glass! Playing around with the natural and healthy goodness of fruits and vegetables, unique combinations and permutations have given birth to a variety of lip smacking numbers. With a multitude of drinks, salads and snack options, Blend!t has found a soft spot in the hearts of all those who want to lead a healthy lifestyle with no compromise whatsoever on the taste. It’s your daily dose of vitamins, minerals, fibres and antioxidants all in one! Now all you have to do is make chocolate healthy Nidhi and I will be your fan for life!

The quiz done, the two winners were presented with baskets full of the most refreshing looking freshly squeezed, bottled juices. With an apt name of MY JUICE BOTTLE; the woman behind this venture was Suja Jacob, a home science graduate with a keen interest in health and nutrition.

Her idea of including fresh fruit juices as opposed to artificial drinks brought about My Juice Bottle. Ranging from grape, pineapple, mango and others (as per season), Suja focuses on fruit juice minus artificial preservatives. Lucky winners I must say!

The event drew to a close with eager participants milling around and getting to know each other with much fervour. Cheerful laughter, greetings and chatter rang back and forth as a wave of connecting the dots washed over everyone. A home cook with a penchant for pickle making found a packing and branding expert, while a baker found a large scale birthday party to cater to. All in all, the goal WOW set forth to achieve was slowly snaking its way to victory!

To top off a wonderful evening, we were served some delightful snacks. Spinach, Corn and Cheese tarts and brownies with white chocolate fudge, blueberries and raspberries.
If it’s one thing I hate about tarts, it would be thick, gunky short crust pastry, but Tina Roy of SUCREE had her tarts do a Goldilocks by being just right! The cheese was still soft and stringy, the veges crisp and the short crust pastry? Suitably thin and crumbly with no buttery aftermath attacking the roof of mouth!
The brownie was bliss. I usually steer clear of anything with berries; but this berry overload did nothing but enhance the smooth flavour of the milky white chocolate fudge and the moistness of the brownie. It definitely hit a home run with my palette!

But brownies and tarts are not the only things Tina bakes up a storm with. In fact, she has a repertoire of baked goodies up her sleeve right from cheesecakes, gateaux to pies and speciality cakes. Proof of the pudding? Sucree is set to open up its flagship store at Centre Square next week!

Tummy and heart full, I mixed in with the crowd. I met some lovely, talented women, went all fan girl with the speakers, chatted up with the gracious hosts; thanking them for such an amazing time; all the while in awe at the immense talent one tiny room held. Imagine if we were all to help each other out, there’s no telling where our lives would take us. Somewhere amazing, some place spectacular…someplace WOW I bet!

7 thoughts on “WOW: What an evening!”