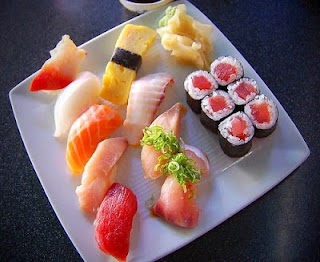 When it comes to experimenting with food, my mum is an old school extremist. According to her, a good meal consists of rice, some gravy, meats and veges. Anything that moves away from this usual norm is termed out of this world horrid. Now how does one introduce the concept of eating sushi and sashimi to such a dyed in the wool 100% cooked food worshipper? It wasn’t easy.

I love Japanese food. My palette happily laps up its fresh and clean flavors. And of all the dishes I have tasted, sushi and sashimi are without a doubt my favorite. Sushi is seafood (raw or cooked) with sticky rice and nori (dried seaweed sheets). Sashimi is finely sliced seafood (raw). Both are eaten with light soy and wasabi (grated horseradish). I cannot get enough of this! I had kept this raw seafood gobbling fetish of mine secret for a while because if my mother ever came to know, she might very well disown me.
I had a little hope though because just the day before I was to confess about my sushi cravings I made my mum watch an entire hour of Andrew Zimmerns Bizarre foods and I must say after watching this man gnaw through fish eye balls and fried pregnant tarantulas, bull penis and balut (boiled fertilized duck egg), she was ready to give up on humanity. I thought considering all this, mayhaps she would think my love for sushi was as harmless as a pet budgie. Was I wrong!

One day, we were watching Jaimie Oliver on TLC. Jaimie chucks in a handful of dill straight from the garden, right into his pan of mushrooms and my mum goes “why is he throwing grass in there? He isn’t even washing it! Lord knows he’s going to die of diarrhoea! Big cook it seems! Mandan*!”
I should have taken that as a hint and kept my mouth shut. But you know how verbal vomit is right?  Once it rises up till your throat, it’s super hard to keep it down.

“Mum, this is sushi. It’s kinda different from everything in sight!”
“What do you mean different?” Her tone takes on a slight edge.

“Well. It’s japanese…”
Just one word and she spent about 10 mins talking about how people from the orient love eating cockroaches, monkey brains, snakes and rats.
“Just the other day they showed a chinese man eating rat which was decaying in wine!”
“Mum, it’s fermenting. It’s supposed to happen that way.”

“I don’t know why people can’t have just good rice and curry and make cookery shows about rice and curry! The world would be such a nice place then! Anyway tell me about this “shoe” thing of yours”
“Mum it’s sushi. And it’s…um…it’s seafood and rice and some seaweed”

“Seaweed? You mean what floats in the water? Oh god! You mean payal**? What is wrong with these people! Eating such dirty things! Atleast it’s rice and seafood. You better throw the seaweed away when u eat this dish ok! I thought it would be something terrible! Except for the dirty payal. It sounds normal”

“Erm…raw?”
Even Niagra falls would have muted out compared to amount of noise my mum made the next second.

“Raw seafood? What is the matter with you? What is the matter with kids nowadays I just don’t understand! Here I am slaving all day COOKING you delicious fish curry and prawn ularthiyathu and crab masala and you prefer eating food poisoning on a plate! Remember the time you got food poisoning from one glass of tainted water? You were shooting out both ends! You were so sick I had to wash up after you! From just water you fell so sick, just imagine what eating raw food is going to do to you?”

“But mum! It’s actually nice. You should try it!” (Stupid move teenu stupid move).
“Haaa! I should try it I believe! Why? You want me to die early so you can eat raw food and live your life like a cavewoman? You show pukey faces when I ask you to clean and gut fish but you eat raw fish that is not a problem eh? When we totally run out of money at home and have to live in a tent, you have full permission to eat all the raw foods in the world but as long as we can afford gas at home all of us will eat healthy, COOKED food!”

Right then jaimie throws some fresh squid into a pan and says ” now this squid are so fresh you barely need to cook them.”
My mum jumps at Jaimie. “Yes! Yes! You too encourage my daughter to eat raw food! Do you know where squids live? In the ocean where our waste is dumped! Barely cook I believe! Even if you fry it to a crisp it won’t be safe! If you had seen Teenu at the hospital puking and pooping you wouldn’t utter the words ‘barely cook’! Big cook it seems!”

“Mum. Um…no use shouting at Jaimie. I’m right here.”
“Yes! I am not done with you! Next thing I know you’ll be eating snails and rats like that fat, bald man on TV. Jobless people! I don’t know how people watch such shows and eat such things! I can’t believe you eat raw fish! I’m taking you to the doctor tomorrow and when he asks me what’s wrong I’ll ask him to check your brain first for eating raw food!”

Luckily I was saved by Adam Richman who was gobbling up a burger that was bigger than his head.  My mother thankfully turned her attention to his open mouth displaying masticated food.
“Ah there is another one! Teaching kids everywhere how to get heart attacks and diabetes in 3 easy steps. Open mouth. Chew. Swallow! Mandan!”

I ran for my life.

Mum and I cautiously avoid the topic of exotic foods and TLC is quickly changed to a Malayalam soap the moment she enters the room.